Hello! Welcome to my website. I first built this site so that others could learn more about me, but I also like to keep it as a personal record of what I've made over the years.

Before I let you look at my work since highschool, first let me introduce myself. I'm Lea Broudo, a software engineer and artist from New York. I've worked on a range of projects, most of which I've included on this site.

Here's a brief timeline of the different areas I've explored over the years:

I was interested in being able to capture people's likeness, so during this time I taught myself to draw portraits. I mainly used colored pencils on toned tan paper. You can check out some of my work here.

After portraits, I began to work on larger and more surreal scenes. I also branched off into other mediums like embroidery and pottery. You can check out some of my work here.

At the beginning of University, I was a mechanical engineering major. During that time, I enjoyed designing parts in SolidWorks and either 3D printing or laser-cutting the final form. Some of my most complete builds from then include an experiment that went into microgravity and a portable Dance Dance Revolution machine. You can check them out here.

After a few years, I missed the artistic aspect of my work that I felt mechanical engineering lacked. I jumped ship and became a computer science major with a focus on computer graphics and vision. Around then I worked on different shaders, a ray tracer, and custom Maya object generation tools. Check my work out here.

I joined the Computer Graphics and User Interfaces lab under Professor Steven Feiner, and have been obsessed with AR & VR development ever since. While there I worked mainly on a collaborative urban virtual environment using SteamVR. Since then I've been working on my own Oculus Quest game, Holo Brawl, through the Oculus Start Program. You can view some of my projects here.

Otherwise, I'm currently working at Zocdoc as a full stack software engineer on the Video Visits team. If you're in the market for a new doctor, I highly recommend you visit them!

These are the projects I've worked on since 2017. They are ordered largely from newest to oldest.

The latest projects are all AR and VR related and built in Unity. Before then I worked on GLSL shaders, a ray tracer, and custom Maya object generation tools. My oldest projects are from when I was still a mechanical engineering major in college, and include a portable Dance Dance Revolution machine and an experiment that went into microgravity.

HoloBrawl is a VR board game where players can personally interact with their pieces. Pieces squirm when picked up, and have personalities of their own! The objective of the game is to kill all of your AI opponent’s pieces before they kill yours.

Players must move their piece to an opponent’s tile to attack them. Each piece has an attack and defense score, and if the difference between the attacker’s attack score and the defense’s defense score is big enough, with a bit of chance the attacker will kill the defense piece. Given different pairings of these scores, pieces can also be counter-killed or pushed to a new tile.

I built this entirely in Unity using the OpenXR and Oculus SDK's. I used hand tracking as the primary interaction mechanism so that the environment and feeling of placing pieces would seem more natural. I also made many portions of the user's world physics-based to aid in the realism. The game pieces were made using Pärtel Lang's PuppetMaster. This allowed them to act as ragdolls when responding to user interaction, but be guided by animations otherwise.

I'm still working on this project as of June 2022, and I was recently accepted to the Oculus Start Program to help me continue development. 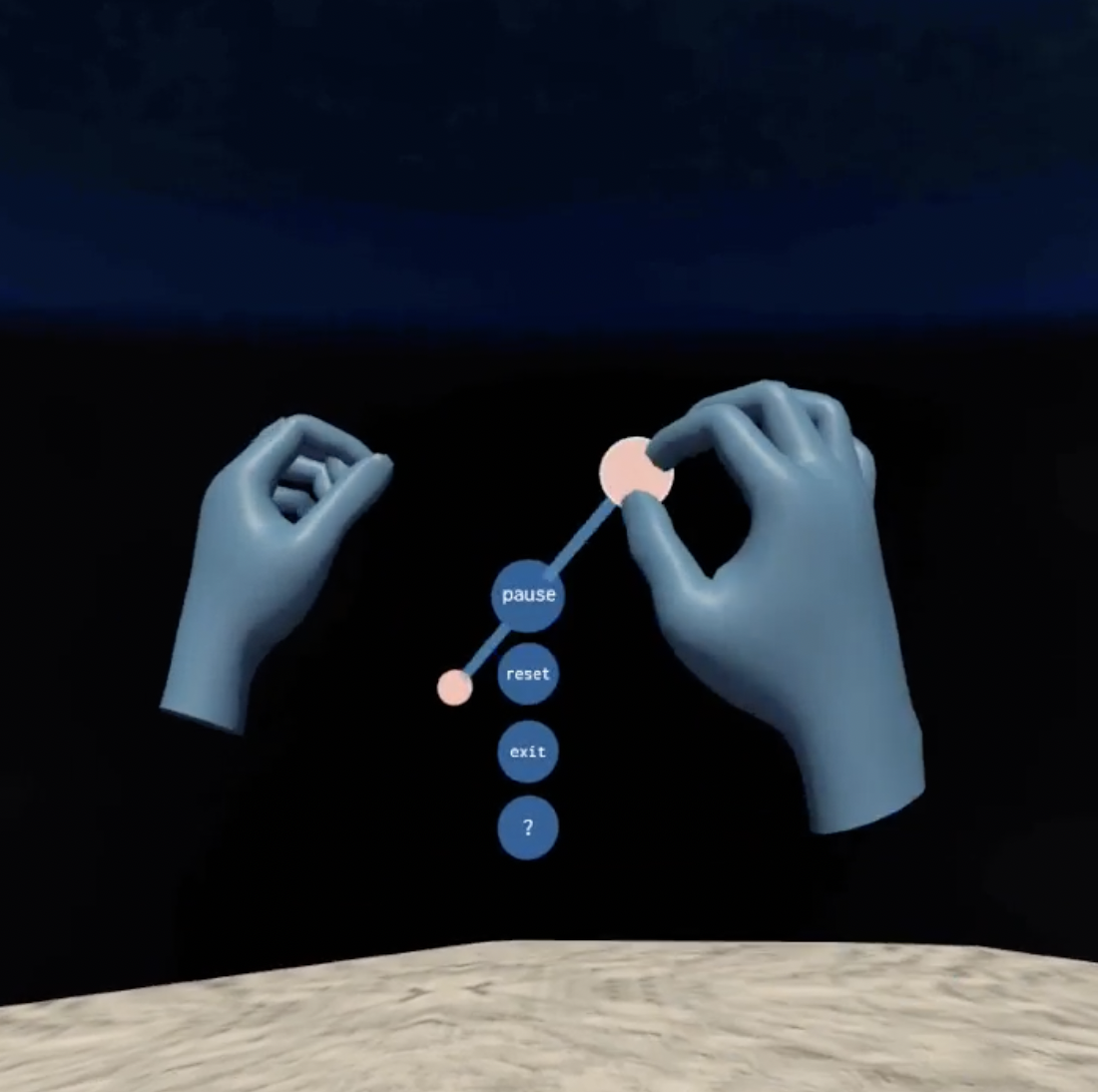 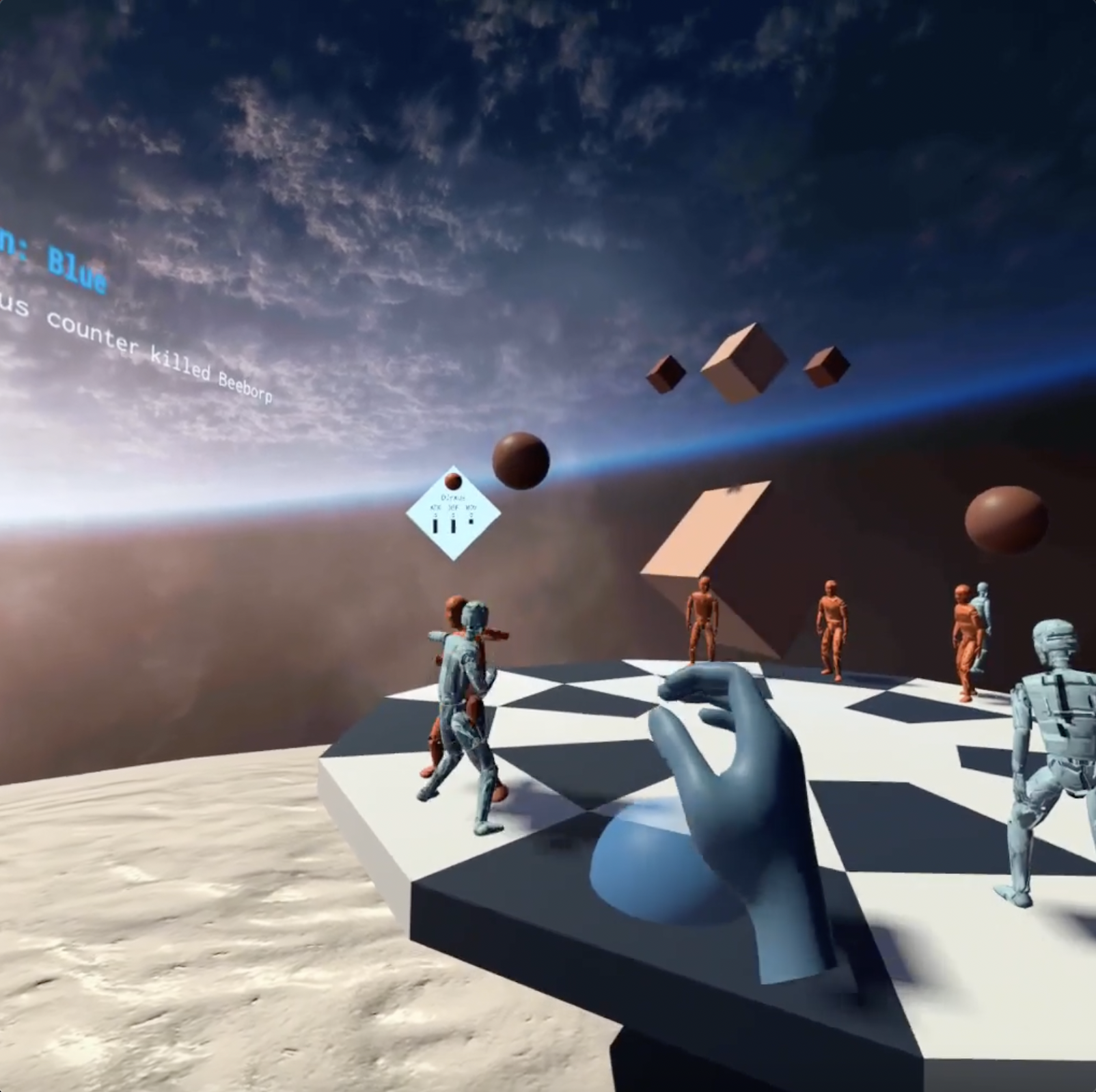 Pieces punching each other 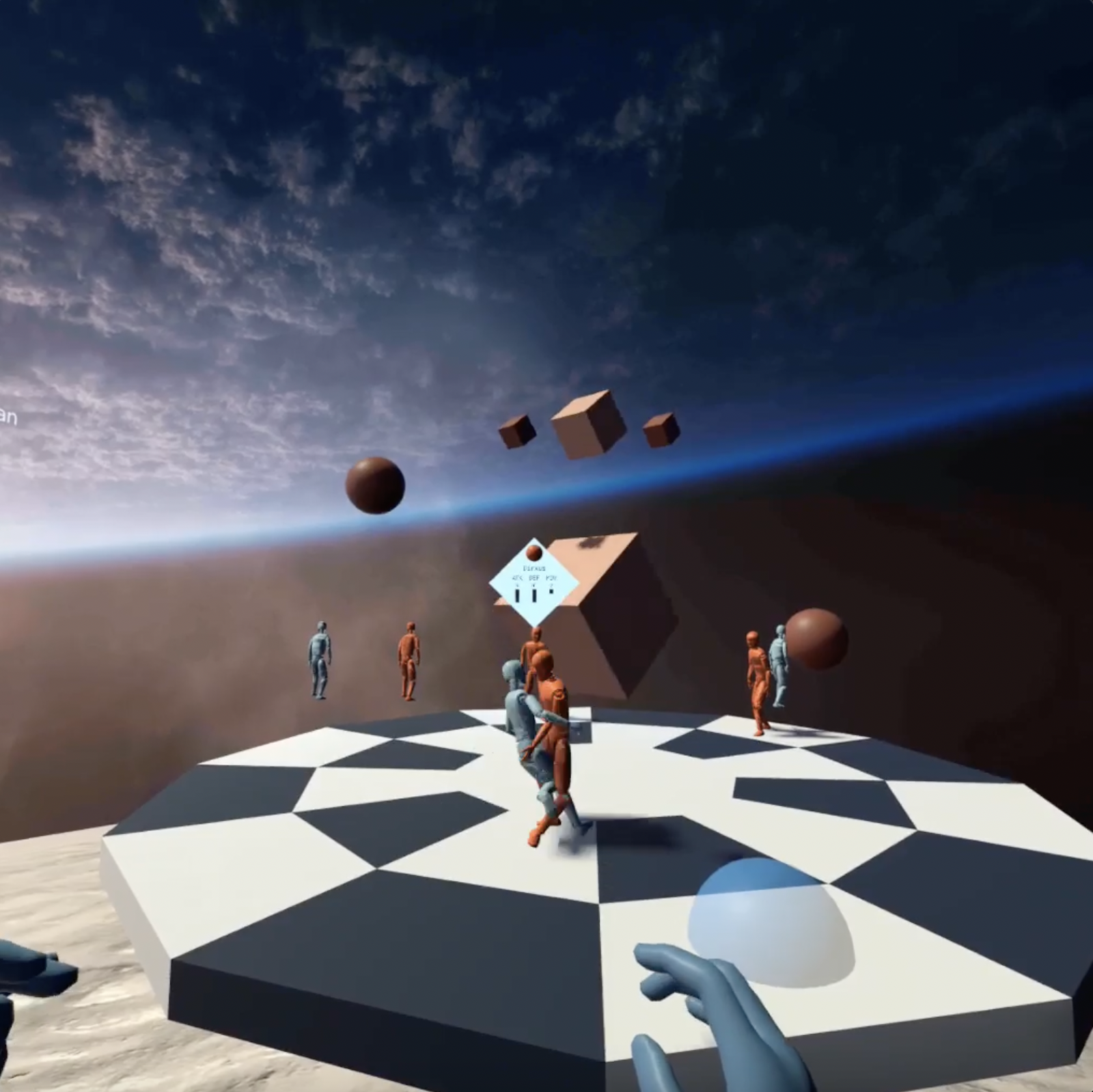 Pieces fighting each other 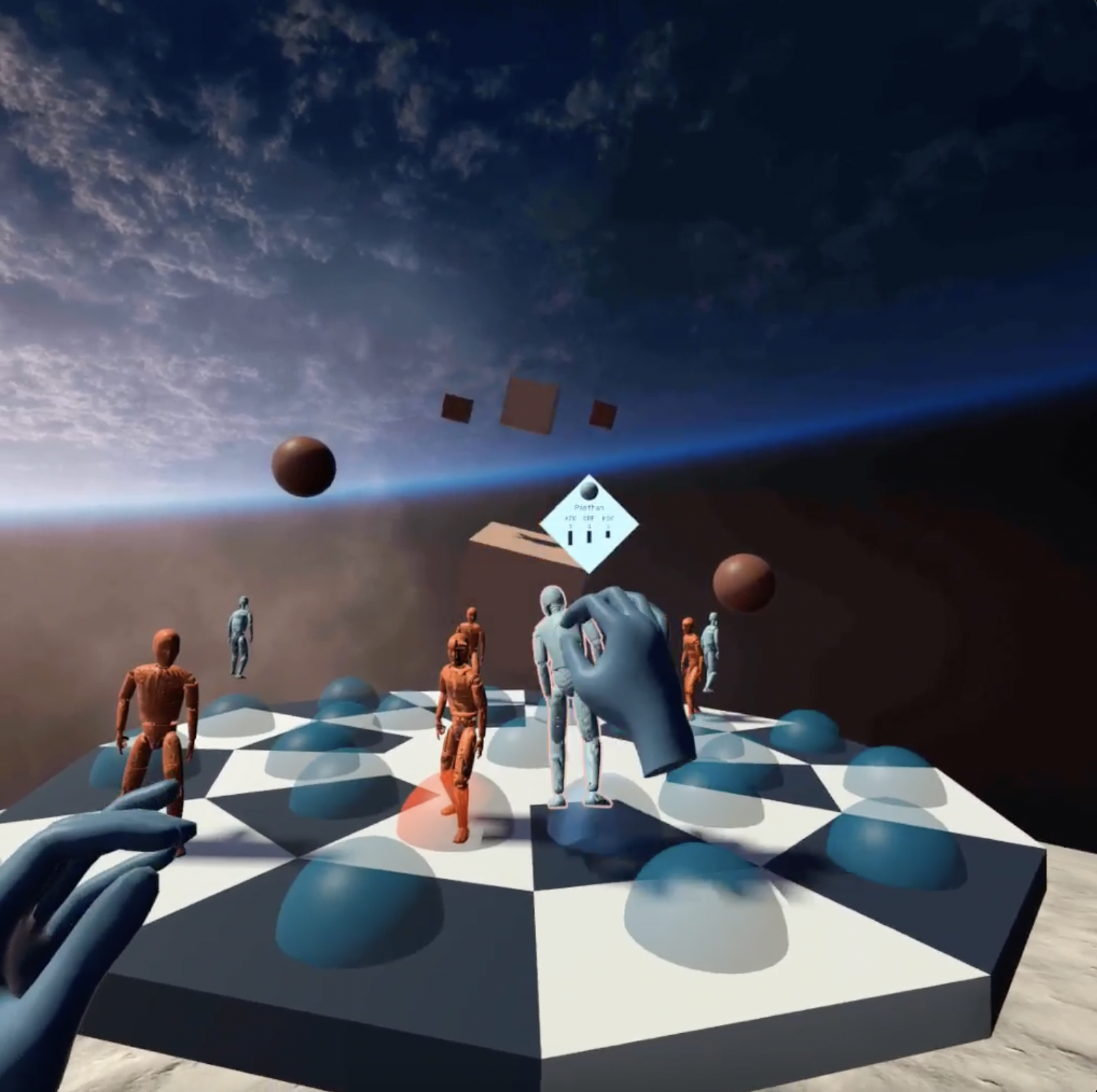 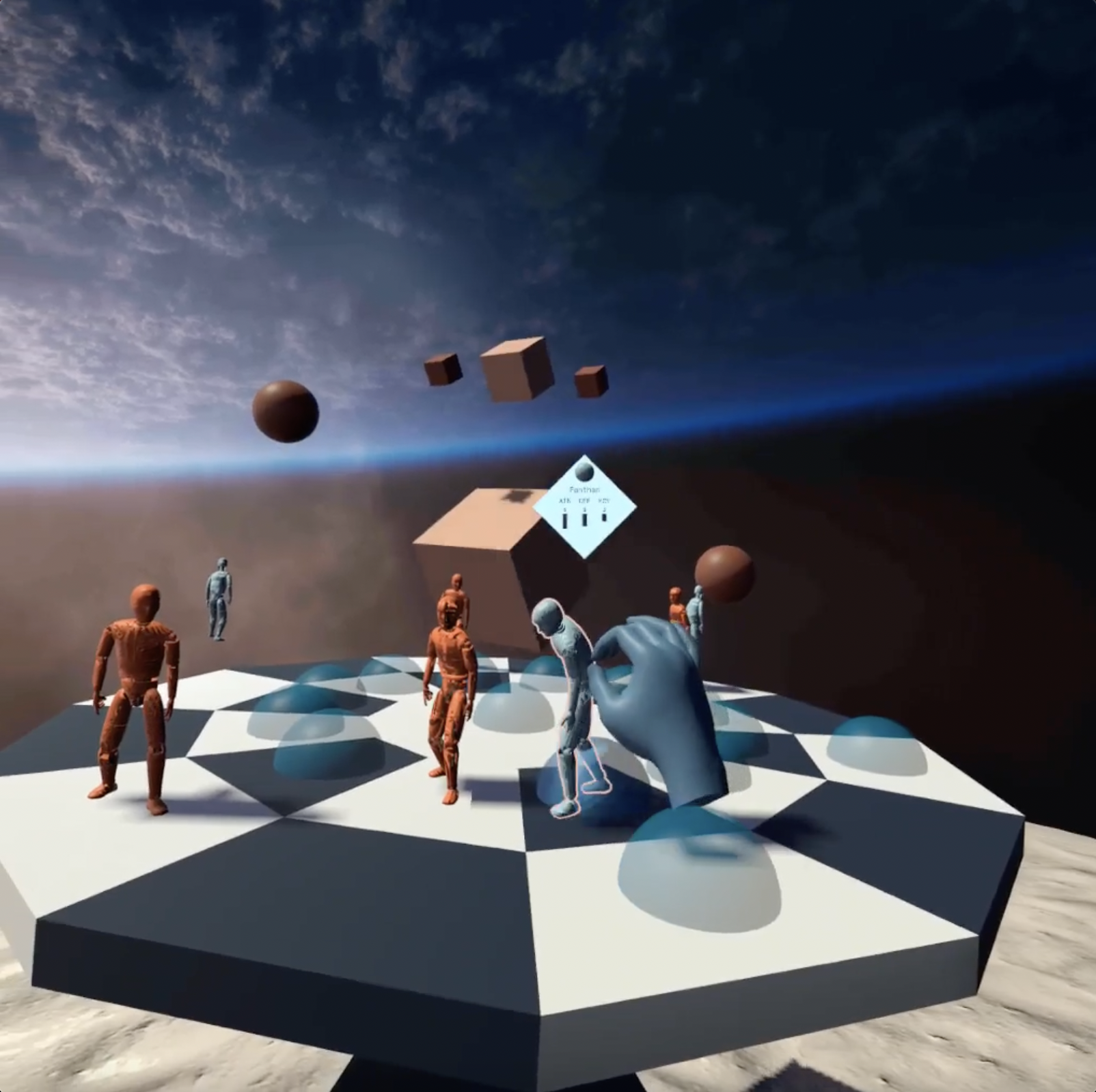 I further developed the project in Unity using SteamVR, and built the pinboards and data placards in the images below. The pinboards include a number of affordances, such as the bookmarking of different data placards, automatic organization of placards discretely or continuously, placard filtering according to a numer of different criteria, and the tethering of nearby or similar placards.

I also migrated the code to use the Mapbox API, which allowed us to better research the interactions of multiple users inside a virtual representation of NYC. In addition, I implemented an exclusively desktop interface so that users without head-worn displays could still use CURVE during the COVID-19 pandemic. 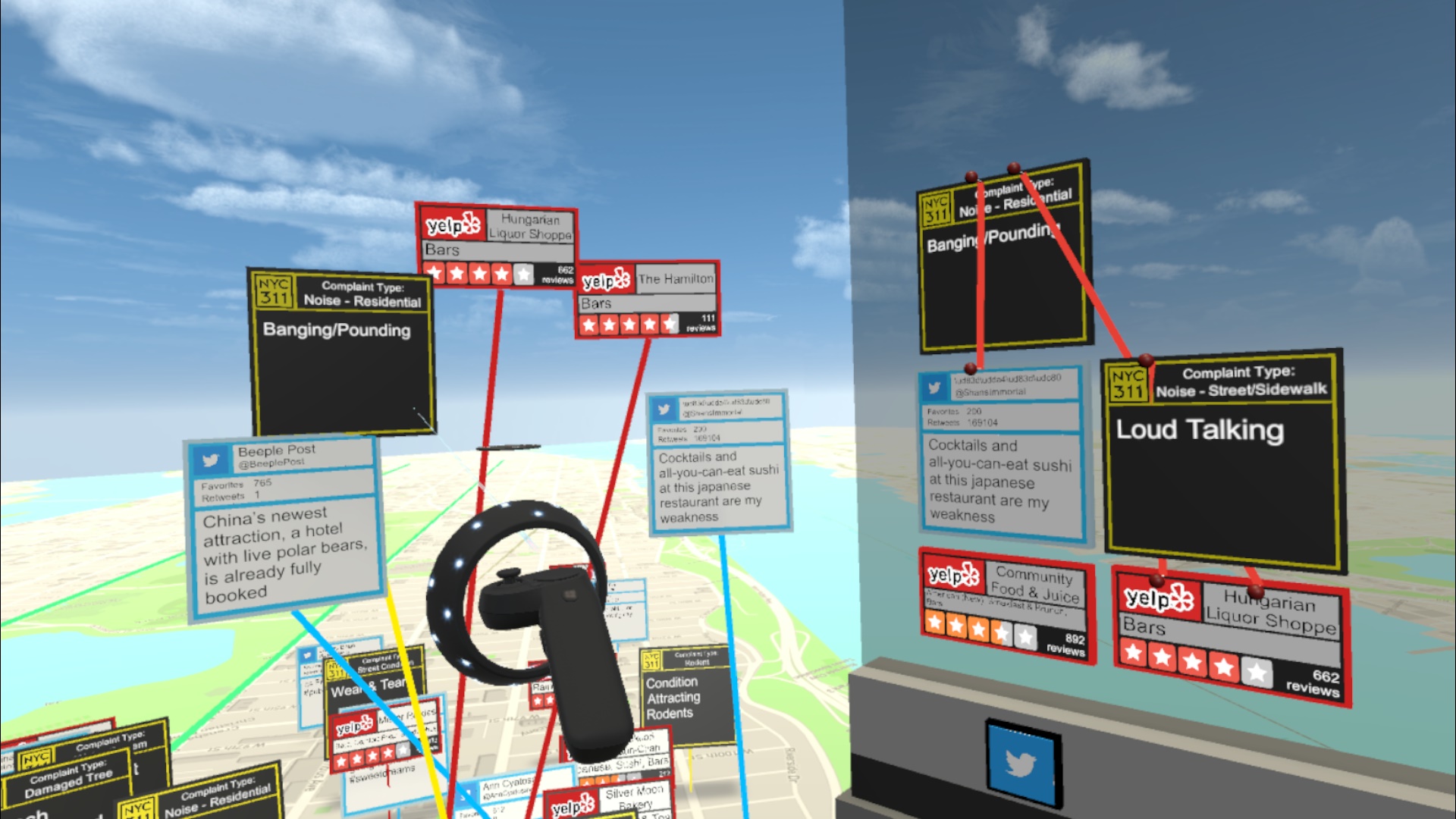 Multi-grabbing placards to place them on the pinboard 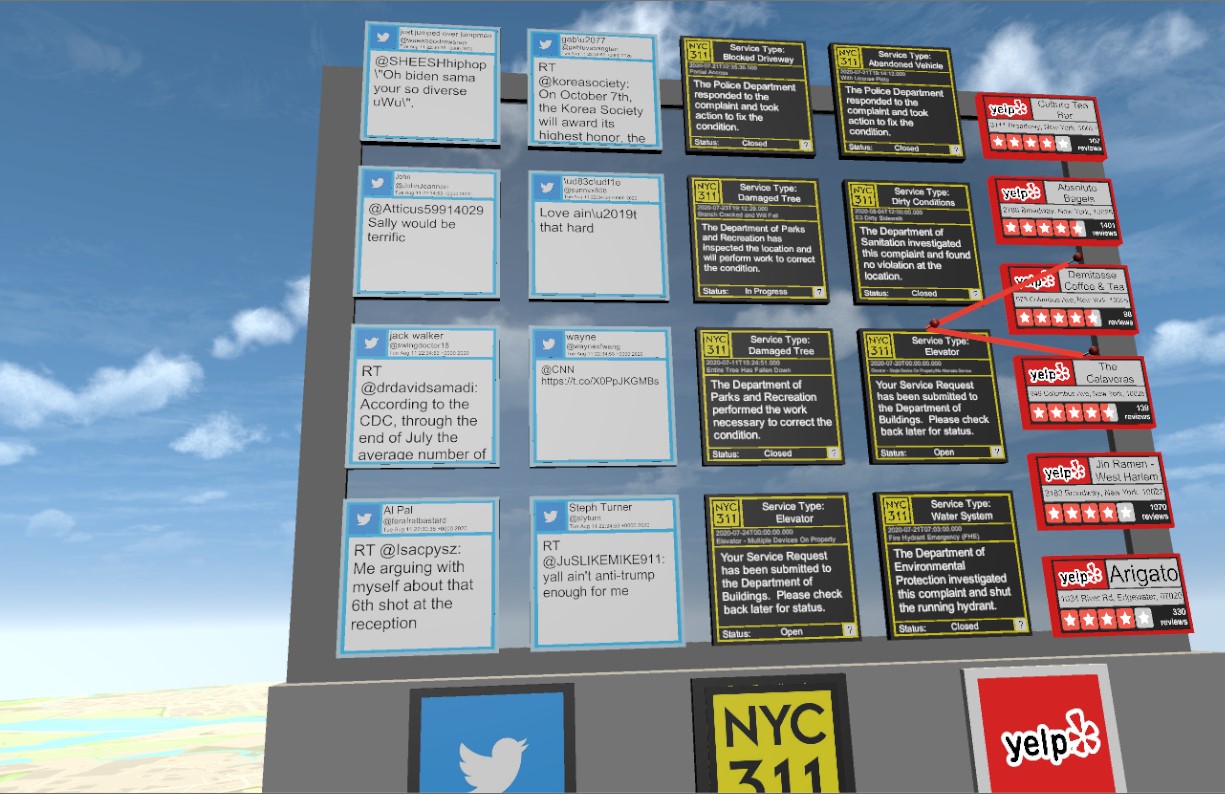 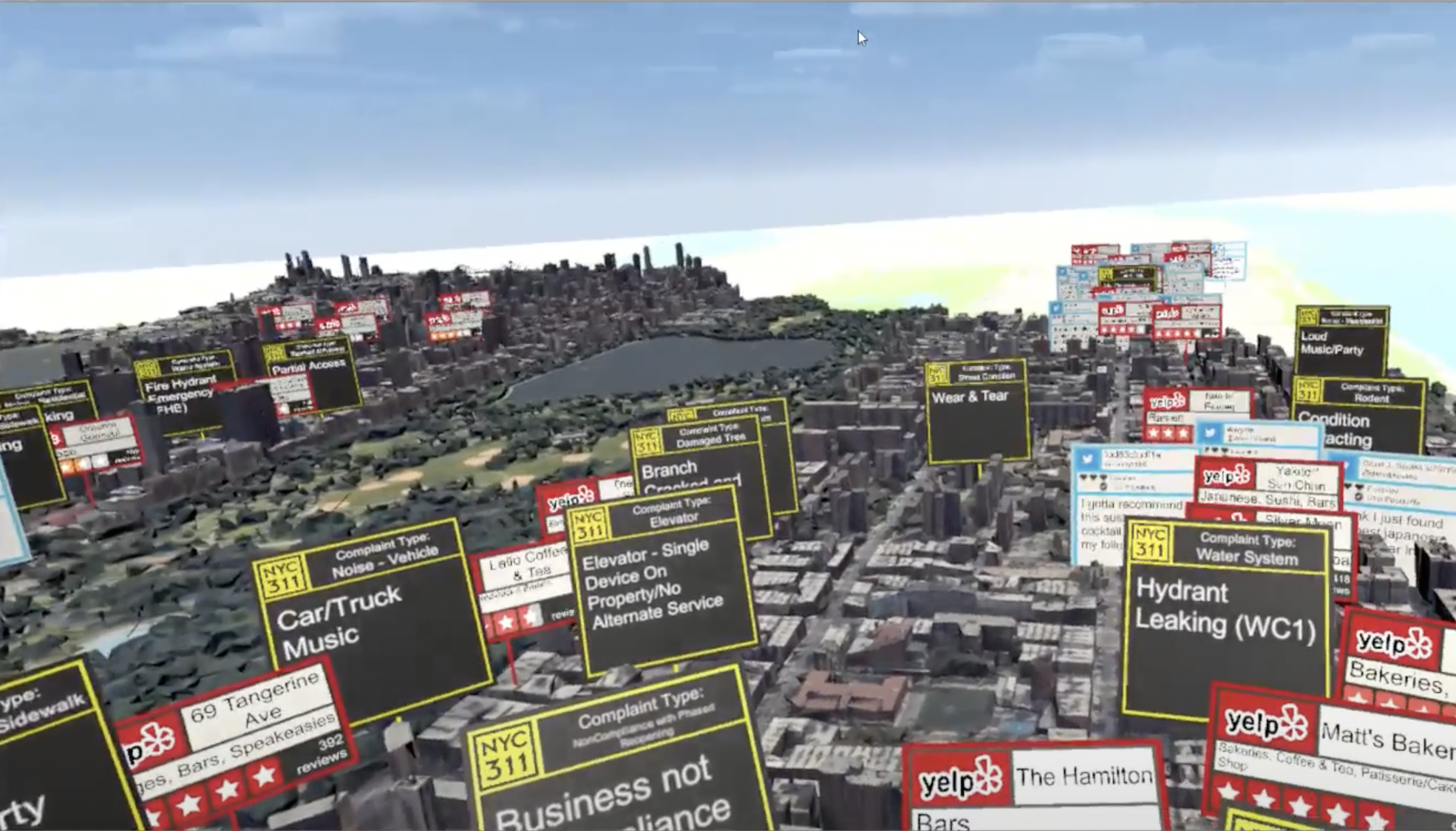 NYC map with Yelp, Twitter, and NYC 311 placards throughout

SineAR is an augmented reality app that allows users to learn about acoustic waves by creating and modifying spatial audio ensembles. I developed sineAR with two other classmates using Unity and Vuforia. With step-by-step tutorials and multiple methods of interaction, users quickly and immersively create sounds in their AR environment. Users experience how modifying frequency and amplitude leads to an interesting new world of sound.

This is a ray tracer I wrote in C++ that uses BRDF calculations to render images. It includes features like recursive reflections, depth of field, and shadows. 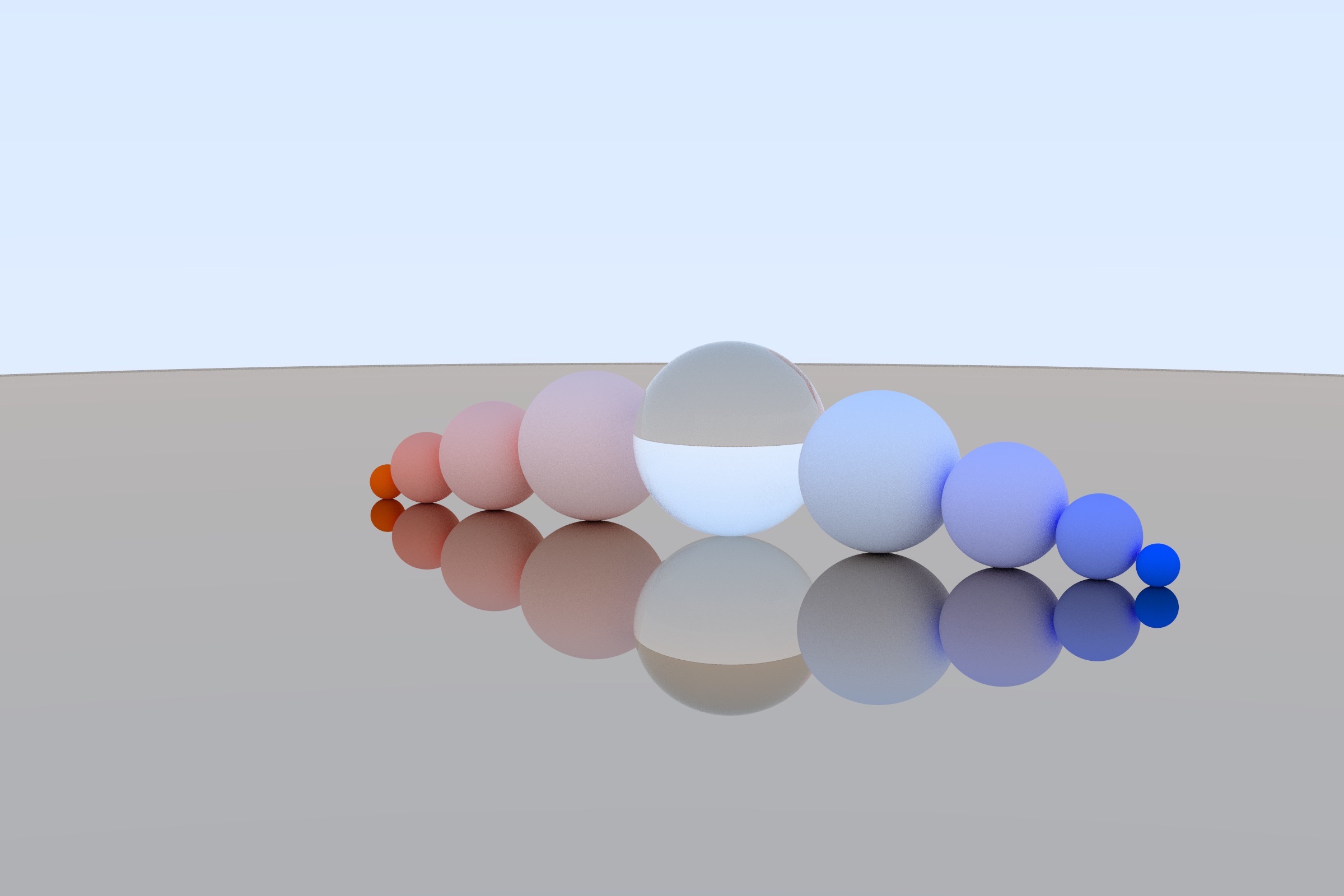 These are a number of GLSL shaders I implemented. They include: Phong, Gouraud, texture modulation, normal mapping, a checkerboard pattern, cel (toon), and a fun rainbow shader!

This is a plugin I wrote for Maya that allows users to create meshes of different types of insects. These insects are created either randomly or according to user-specified input in a slider menu. The tool was written in Python using the Maya API, and the final insects were rendered in Arnold. 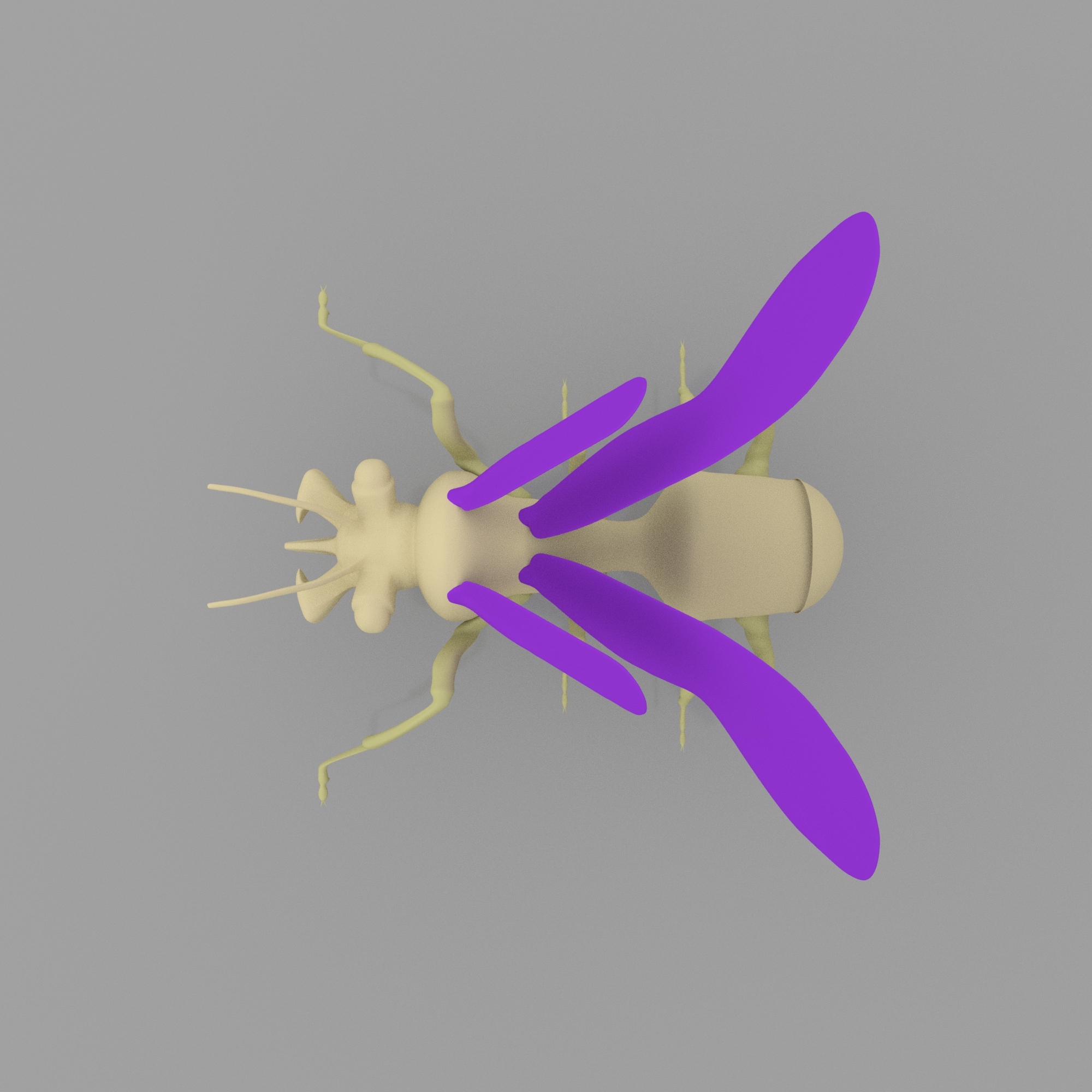 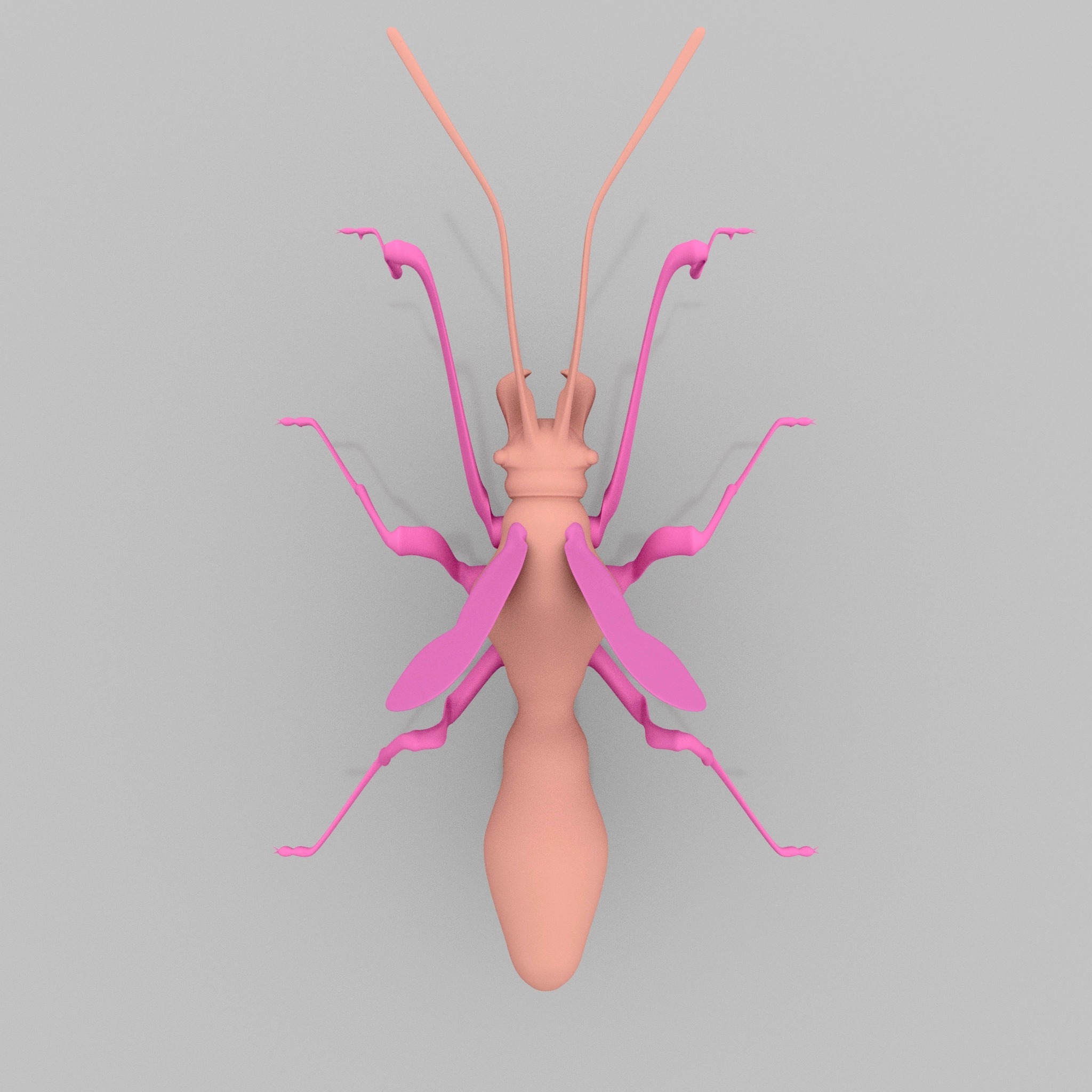 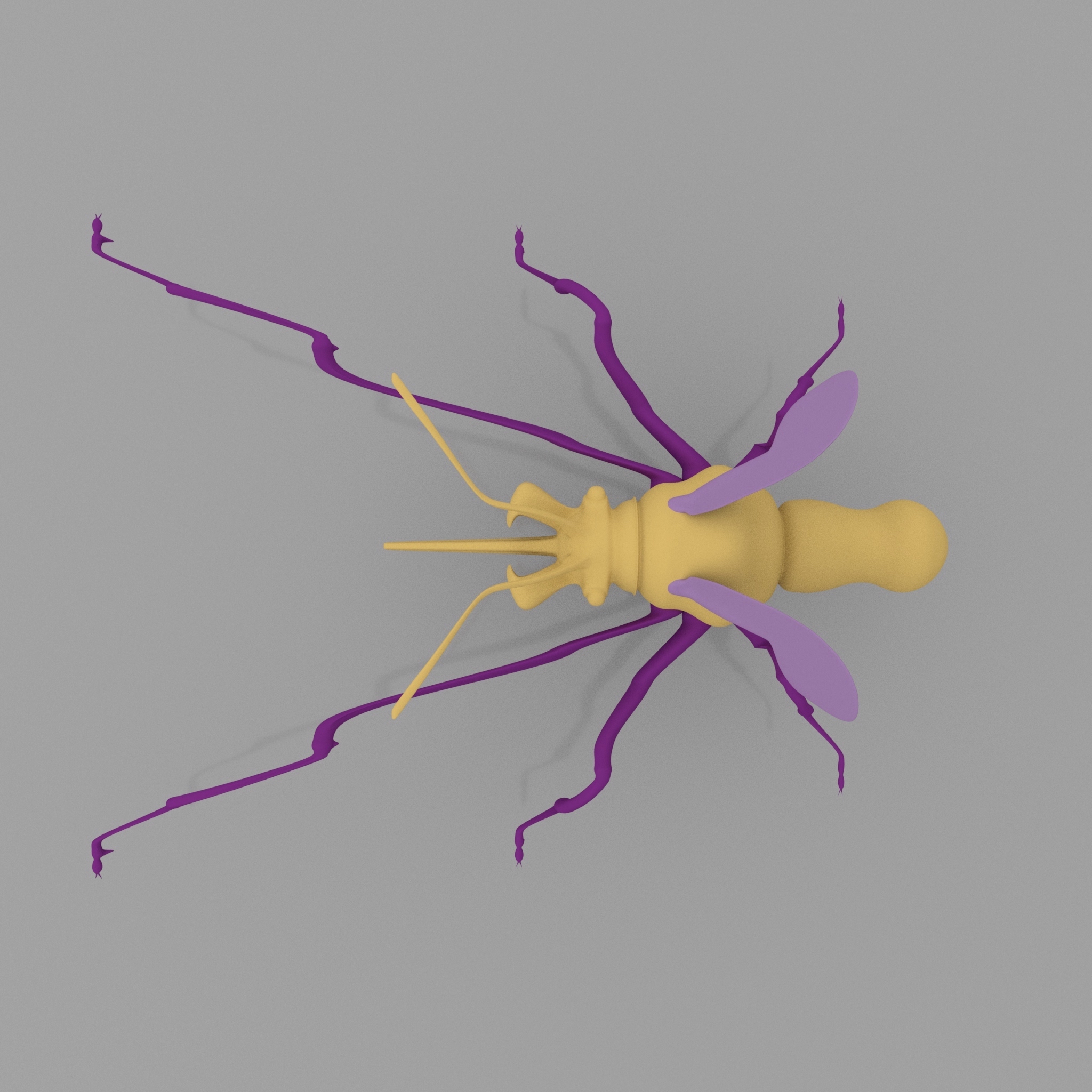 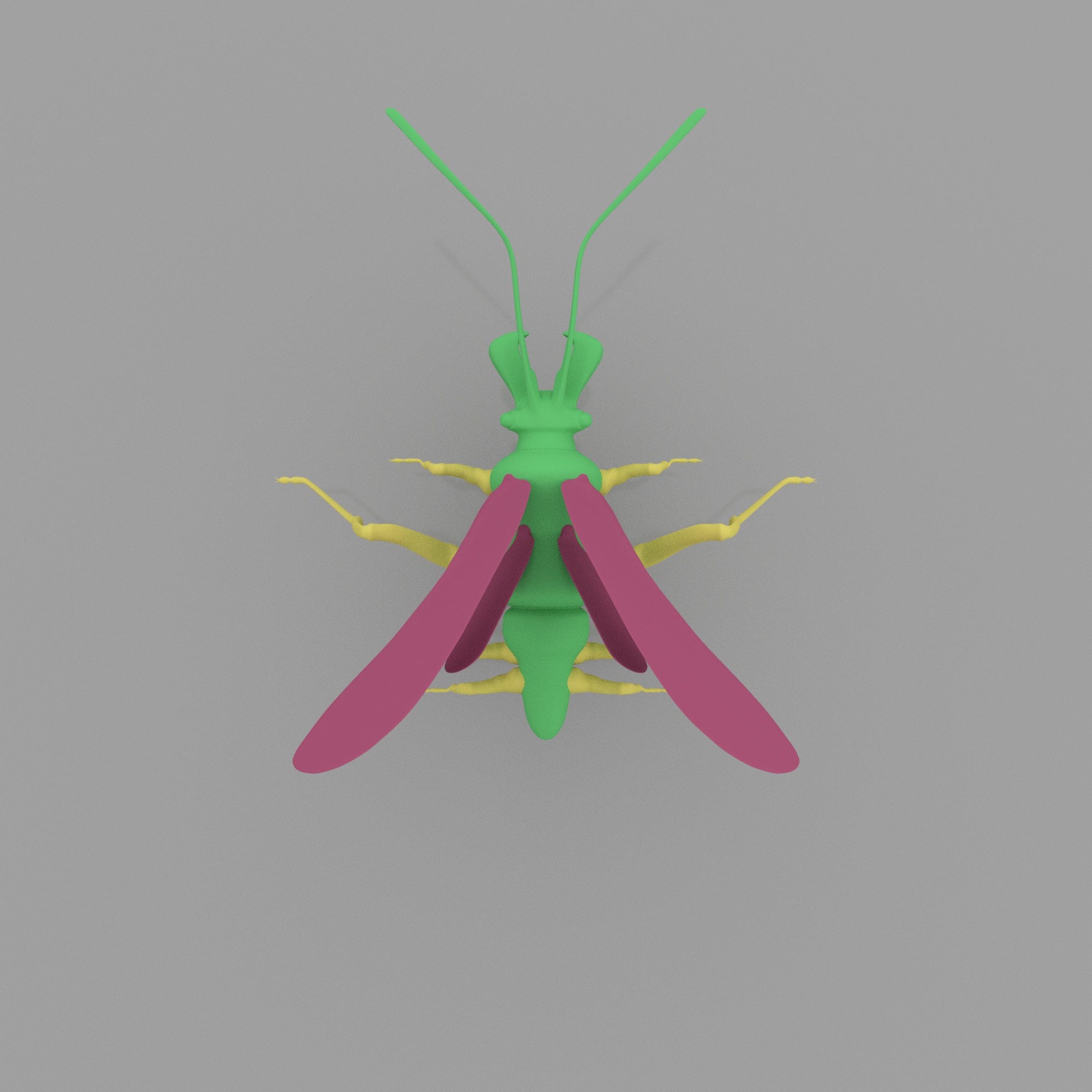 In this project, I was interested in creating a Maya plugin that lets users procedurally generate different types of trees. In order to generate trees that looked realistic, I used procedural L-systems with stochastic sampling. Users can input their own seeds to create even more varied trees, and they can also control parameters like branch tapering, leaf and flower density, and mesh texturing.

The tool was written in Python using the Maya API, and the final trees were rendered in Arnold.

This is a character I modeled in Maya and textured in Substance Painter. I dubbed the model "Walter", and was responsible for the concept and design. The character also has a fully functional rig with both inverse and forward kinematic functionality for the arms, legs, and spine. I also animated the walk cycle myself, and rendered the final scene in Arnold.

For this project, I wanted to create a tool that gave artists a realistic figure model to use for sketching and illustration. I thought it was time for an upgrade from those old-school wooden models, so Sketch Sage was born.

The UI was developed using plain JavaScript and HTML/CSS, and the graphics were all made using Three.js. After the desktop and mobile versions were completed in July 2019, the site gained over 1,500 active users in its first four months.

My friends and I built this Dance Dance Revolution hand-held game completely from scratch. I used SolidWorks to design the container, and we laser-cut acrylic boards to create the physical shape. We used an Arduino to power the game, so we wrote the logic in C++ and wired it up completely on our own.

It was suprisingly fun to play, but extremely difficult since players lose points if a button is hit even just slightly too late or early. But overall, it was a fun project to work on. 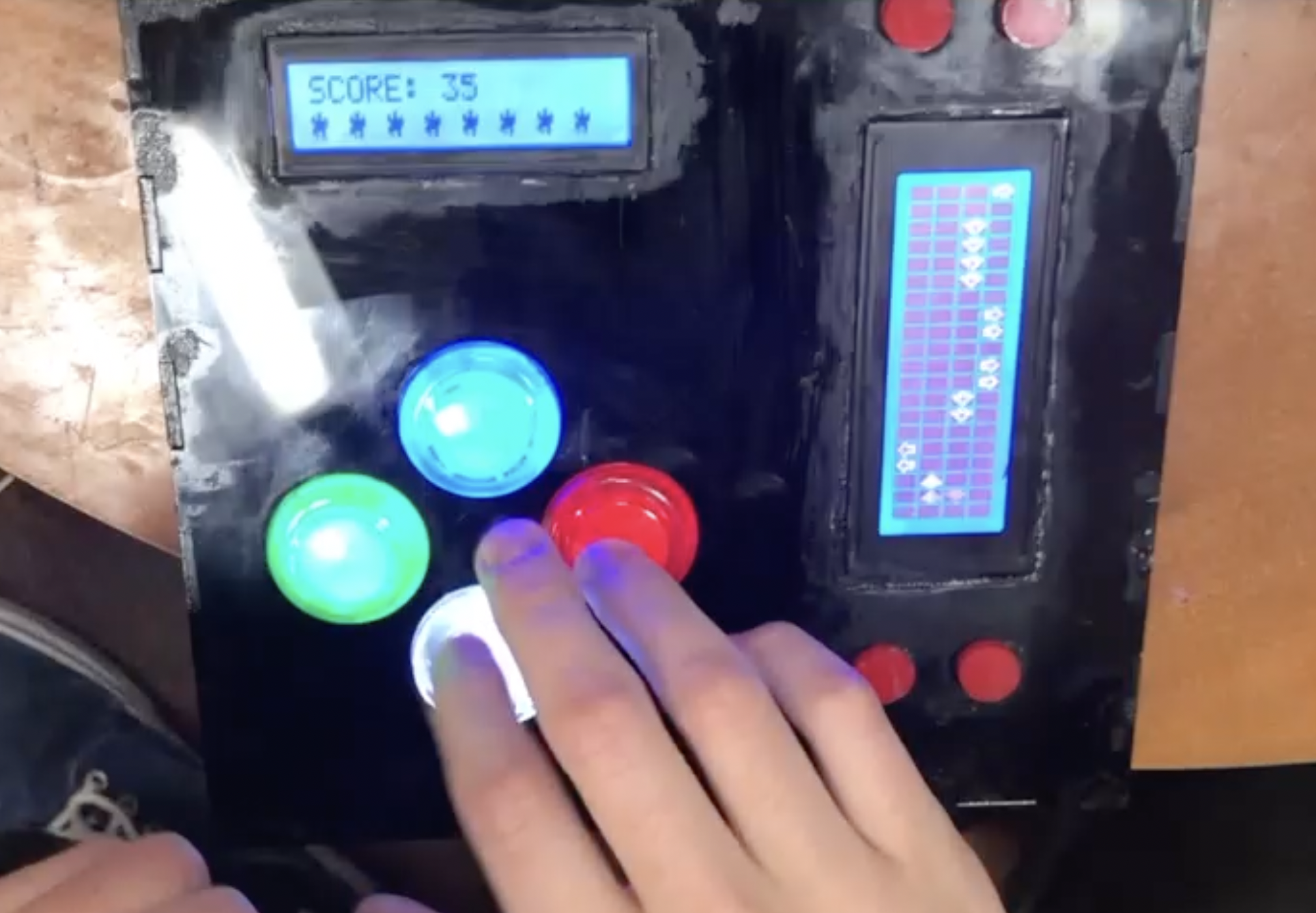 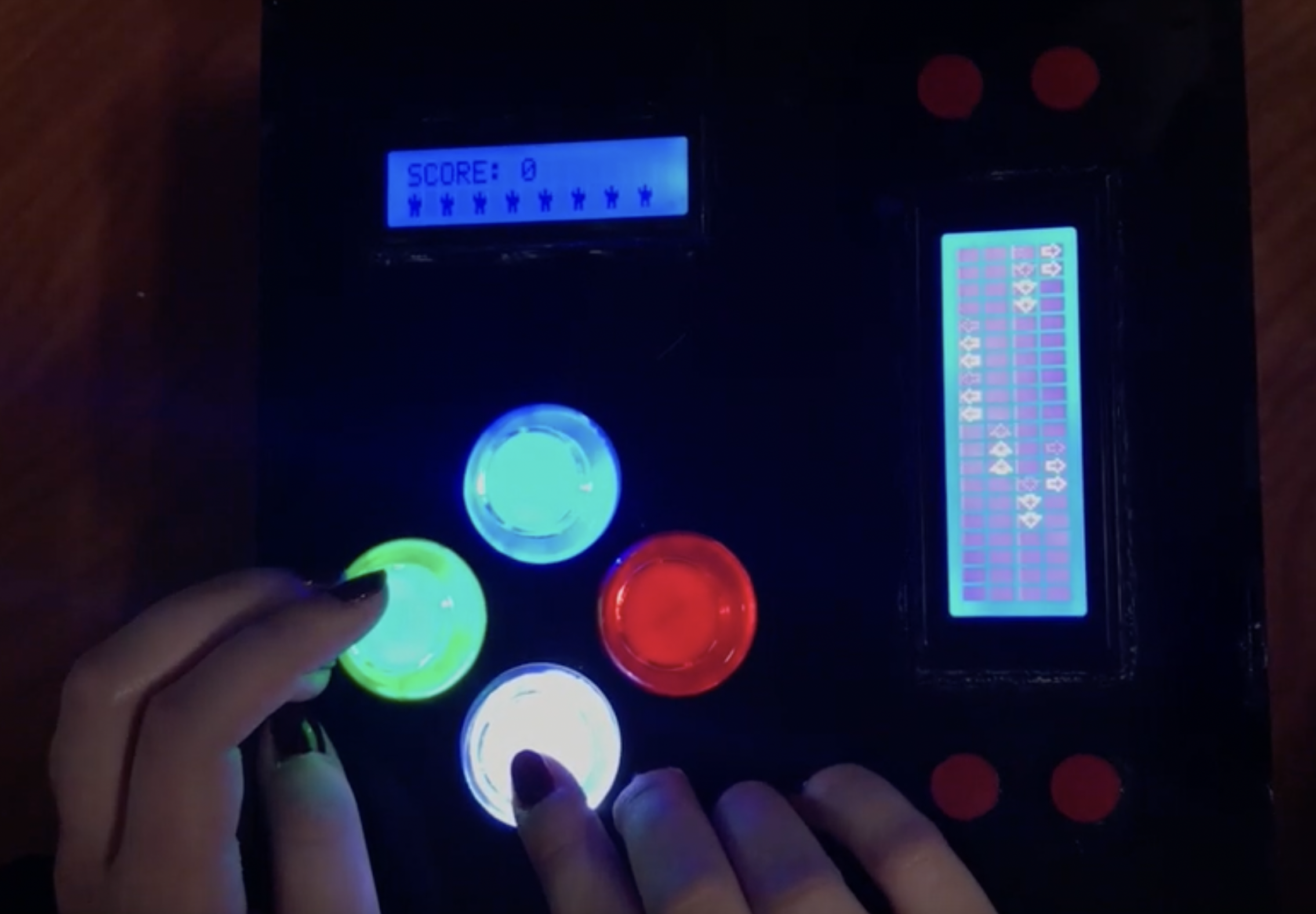 Human spaceflight has been shown time and again to impose a variety of negative effects on the body. Looking specifically at eye function, about 30% of astronauts on short-term flights and 60% on long-duration missions to the ISS have reported impairment to their vision.

Building off previous studies identifying cellular disorganization and deterioration after simulated microgravity, this project aimed to further explore the effects of true short-term microgravity exposure on eye tissue and retinal glial cells. The cells were exposed to microgravity for several minutes during a Blue Origin New Shepard flight.

I helped design an automatic payload to house cultured cells and inject a solution of RNA stabilizing solution at two time-points immediately before and after microgravity exposure. All parts were 3D printed in PLA except the outside shell which was aluminum sheet metal with CNC machined holes. Material was removed based upon topology simulations to produce highest strength to weight ratio. Two linear actuators were used to push fluid into six cell cultures. These cell cultures were housed in a 3D printed container filled with aerogel to minimize heat loss from the system. 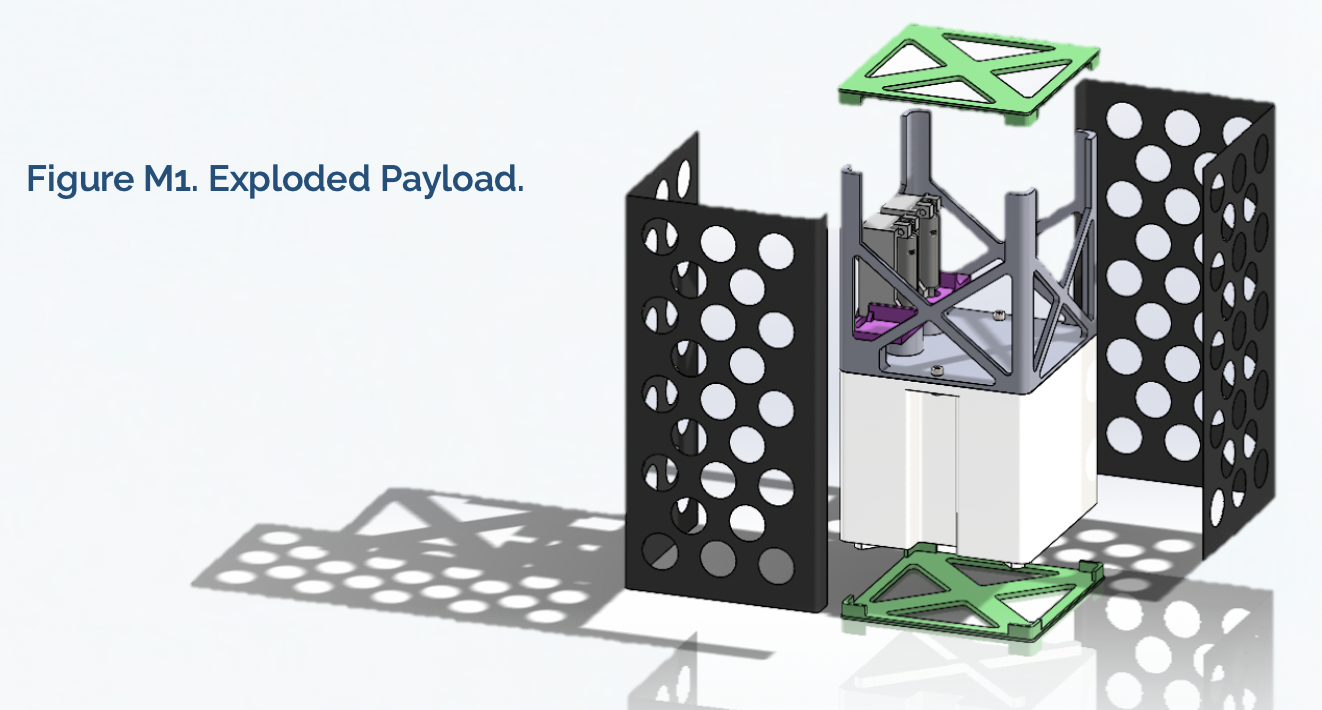 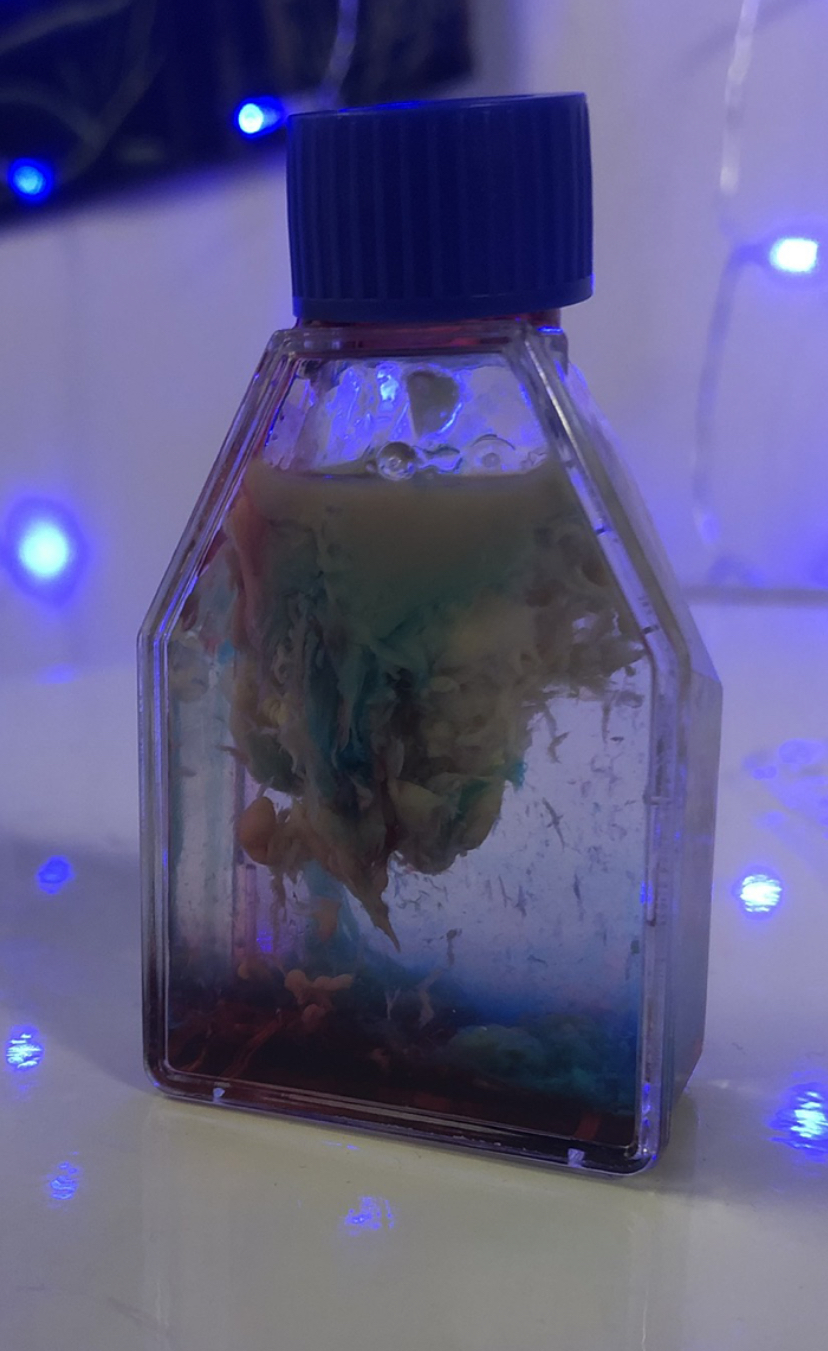 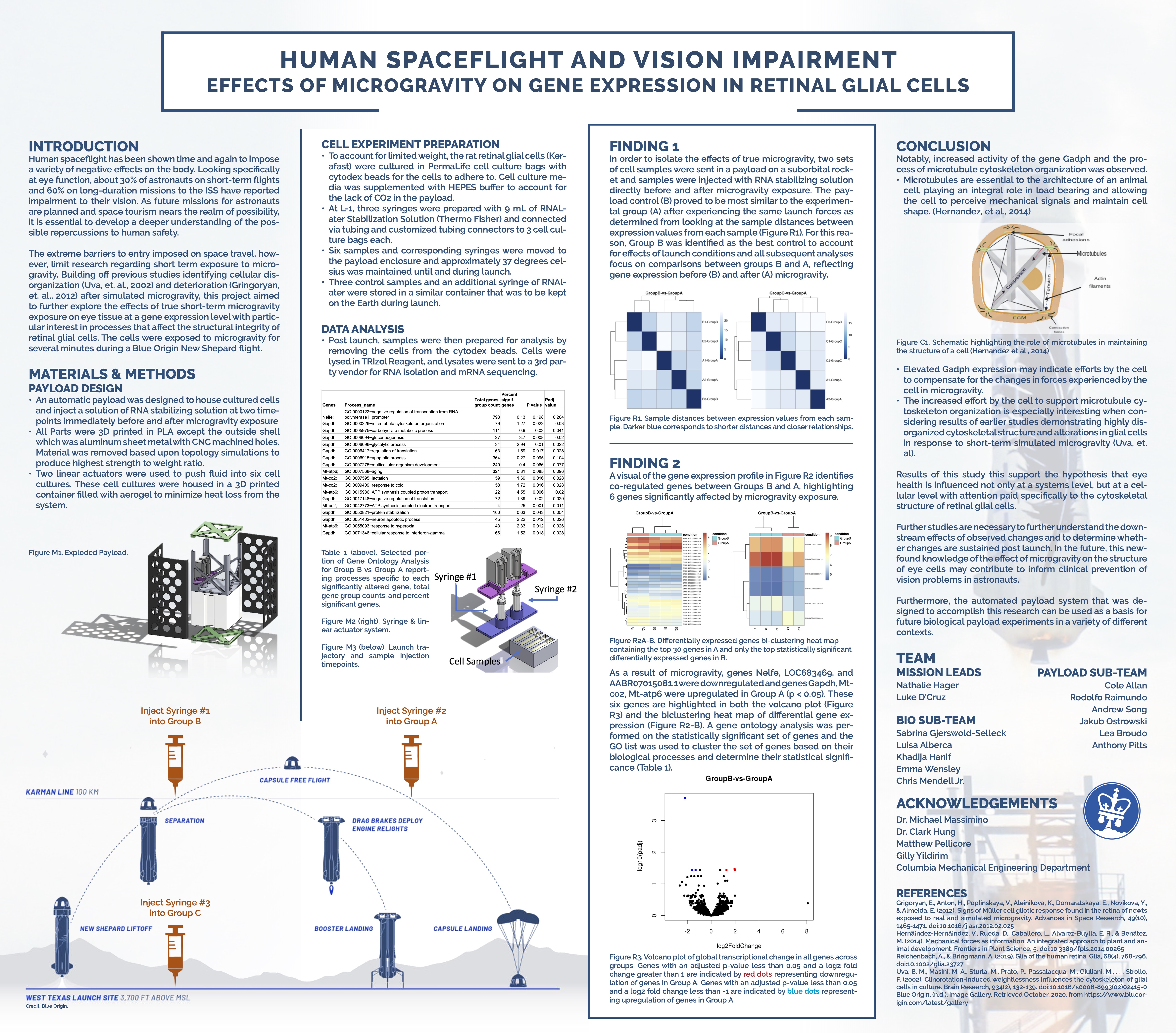 AR app that allows users to learn about and spatially play with acoustic waves.

Maya plugin to easily generate a variety of insect models. 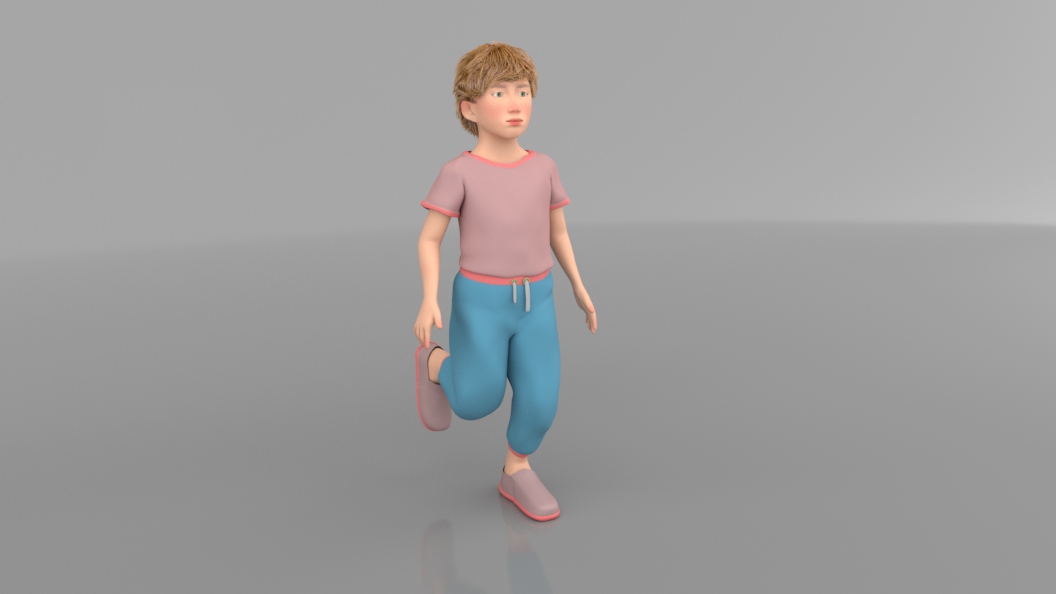 3D model, rig, and walk cycle created in Maya and rendered in Arnold. 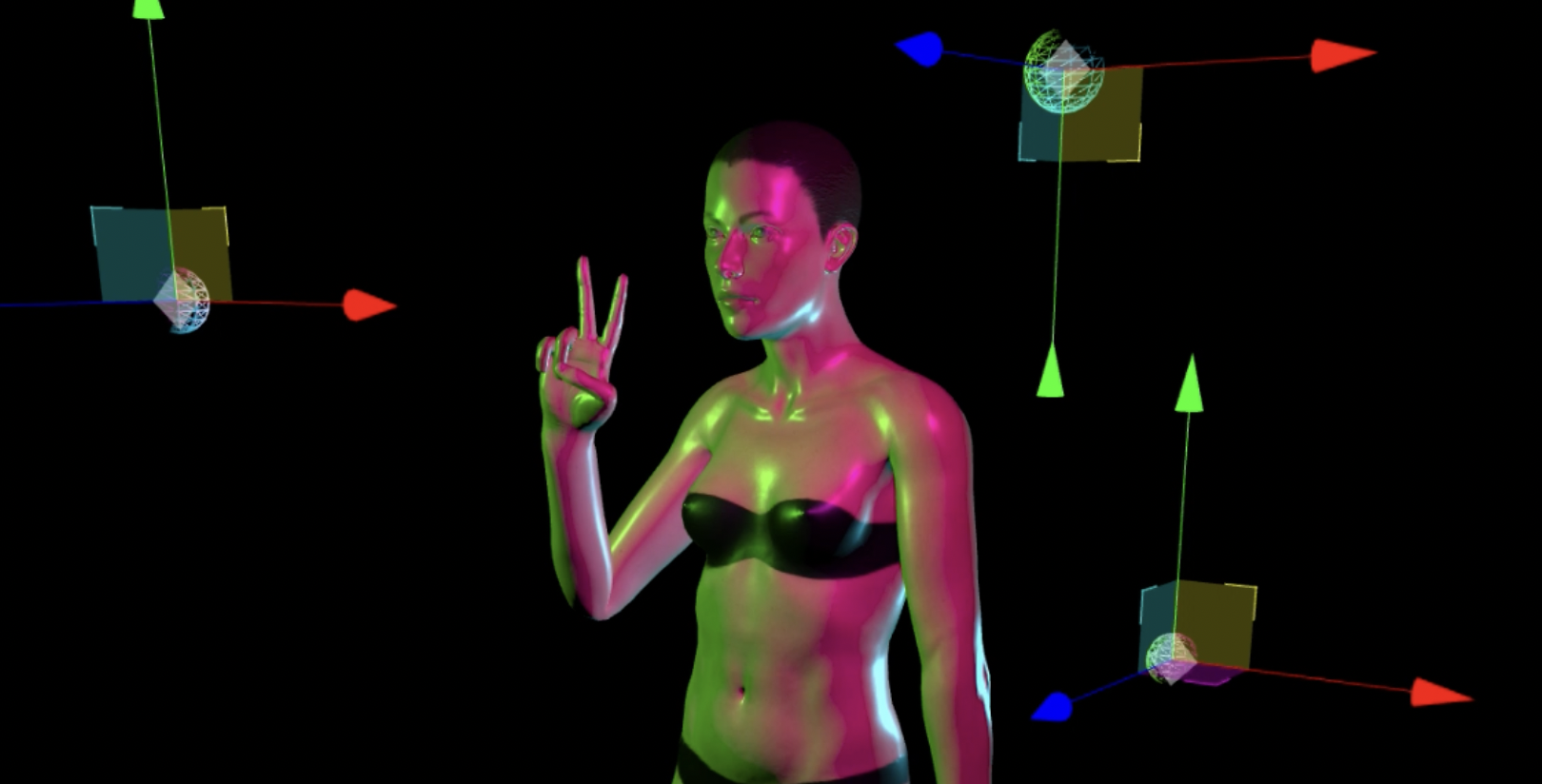 Realistic, poseable online figure model to use for sketching and illustration.

I won the Congressional Art Award for the second piece below, Head in the Clouds, which was displayed in the U.S. Capitol for a year. 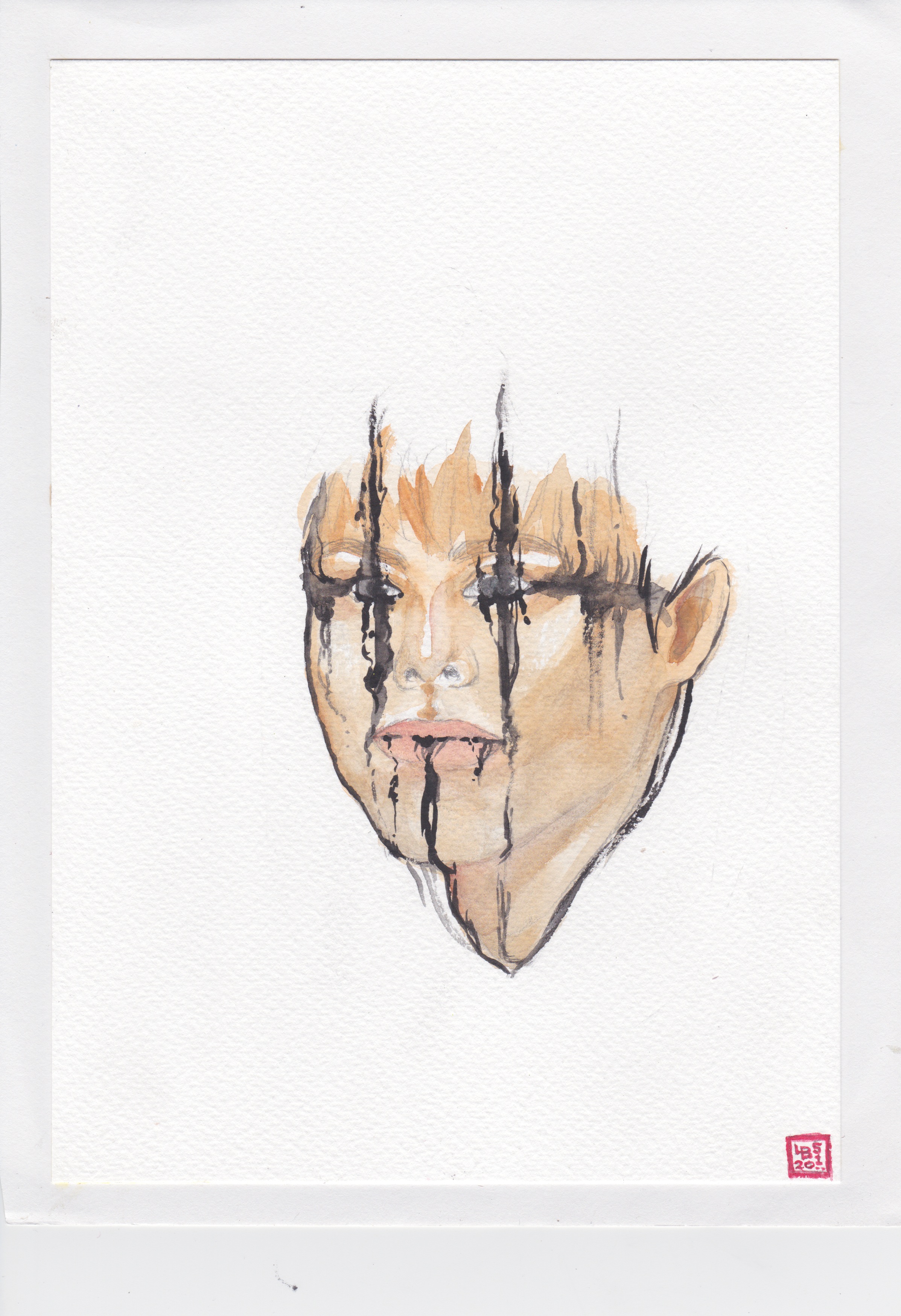 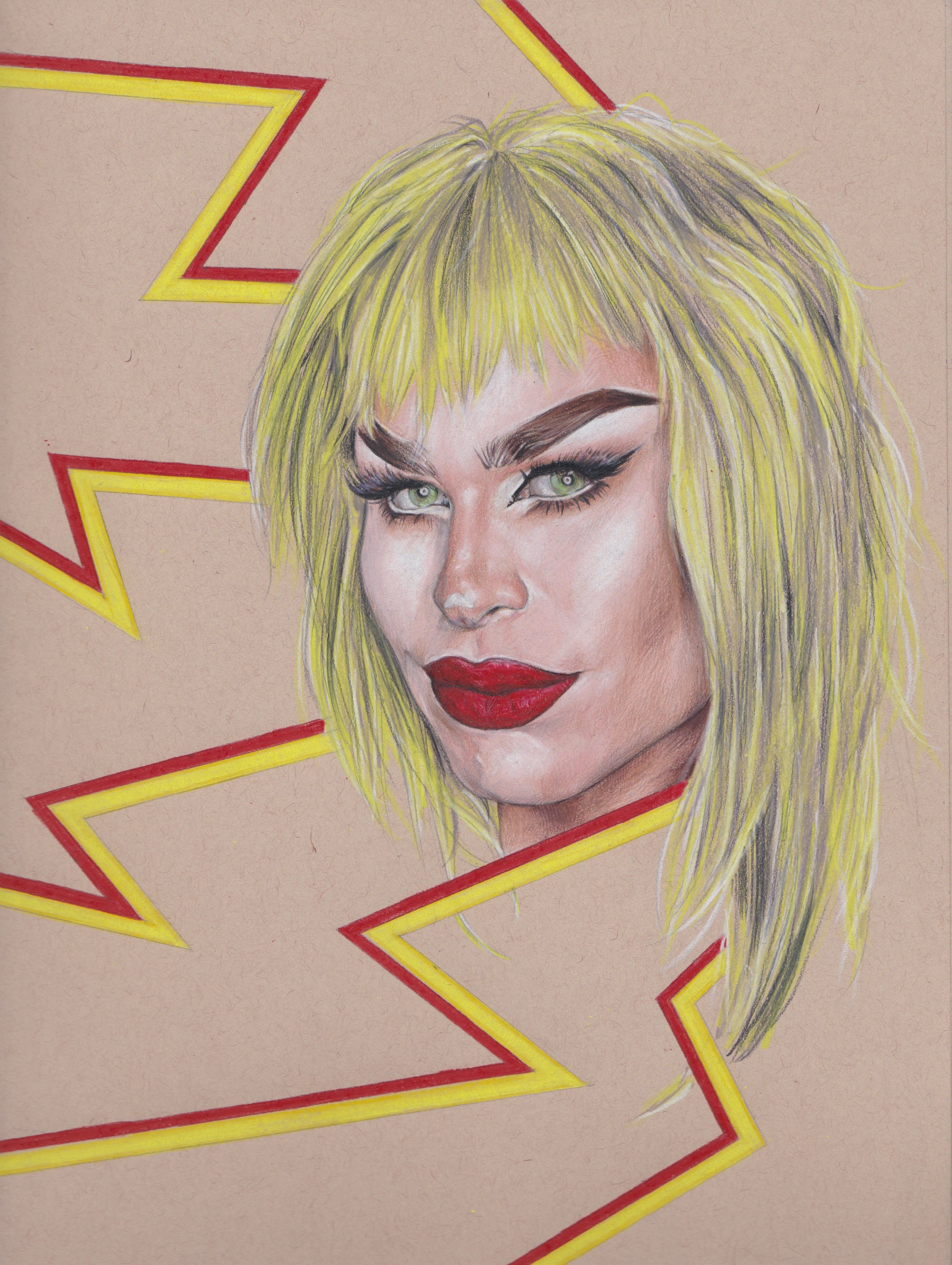 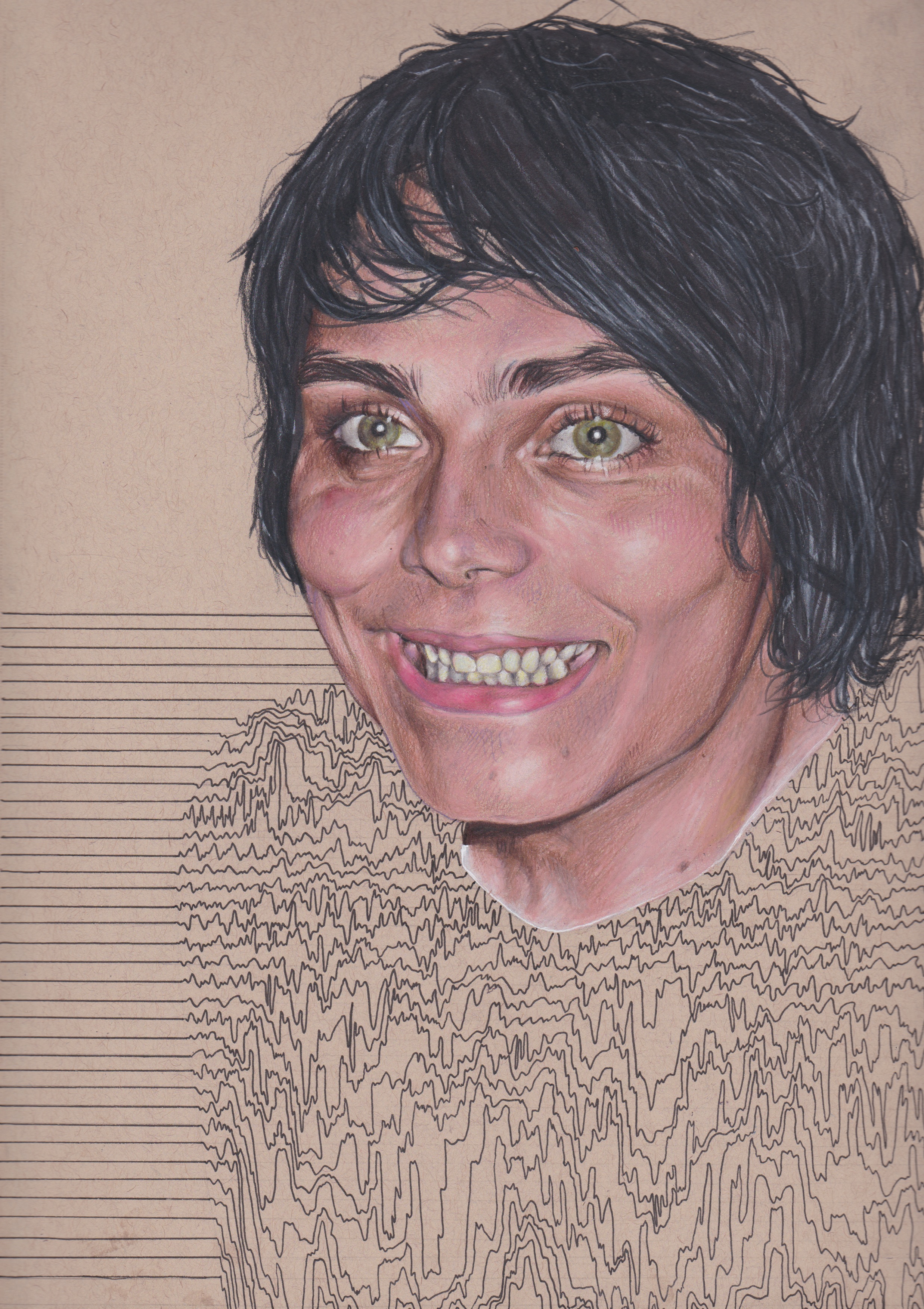 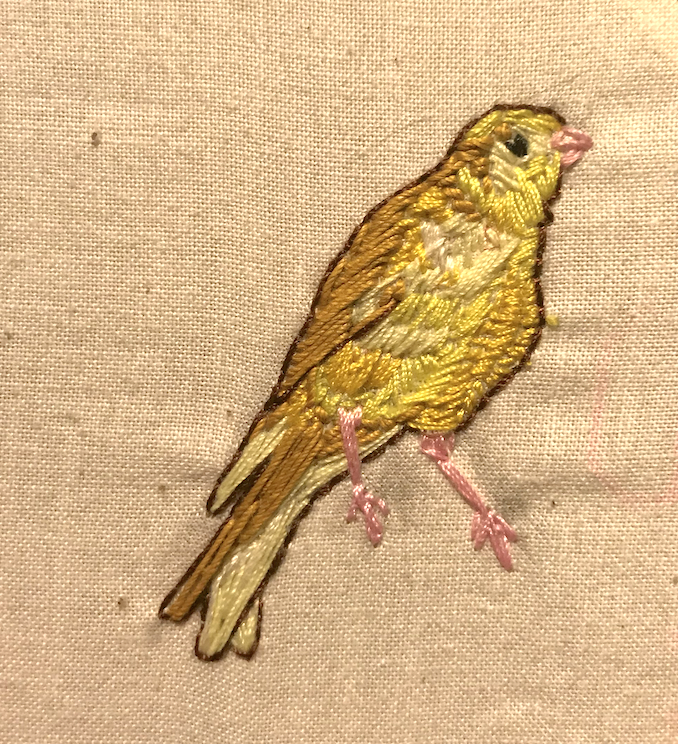